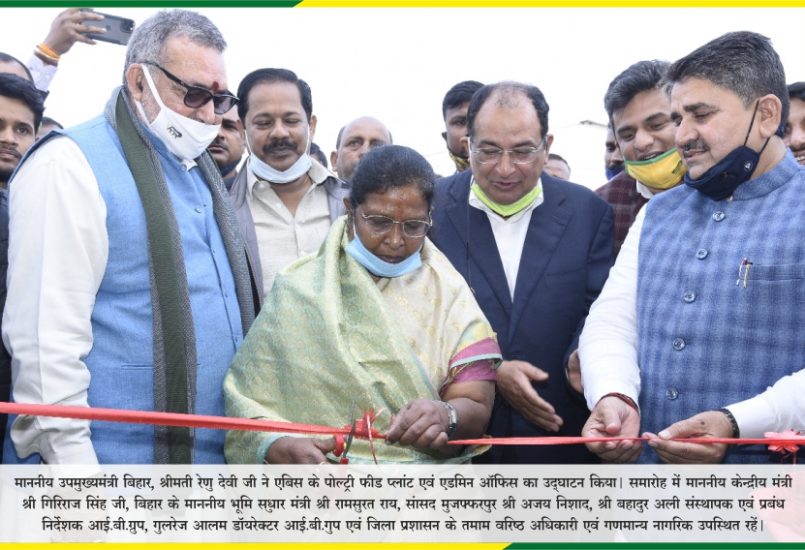 Conceptualizing the vision of an “AATMA NIRBHAR BHARAT”, the ABIS EXPORTS (INDIA) PVT LTD inaugurated a poultry feed plant in MUZAFFARPUR, BIHAR today on 9th JAN, 2020. This feed plant is equipped with a capacity of 1200 metric tons per day (MTD) and is situated in the BELA DISTRICT of BIHAR INDUSTRIAL DEVELOPMENT AREA. The inauguration was carried forth in the benign presence of the Honorable Central Minister Shri Giriraj Singh, Minister of Fisheries, Animal Husbandry and Dairying, and distinguished guest Shrimati Renu Devi, Deputy Chief Minister, Bettiah.

The Founder and Chairman Mr. Sultan Ali, Founder and Managing Director Mr.Bahadur Ali, and Director Mr.Gulrez Alam of the ABIS EXPORTS  (INDIA) PVT LTD come across as the pioneer leaders of today’s Aatma Nirbhar Bharat and are setting examples for a better future for the industrialists of Bihar and India as a whole. The plant covers a total of 5 acres of land and aims towards building a state of art infrastructure of a poultry feed plant. The company is looking forward to provide livestock feed and fish feed in the near future. The proposal for the said plant was forwarded to BIADA’s in November and the allotment letter was provided on 30th NOVEMBER, 2019, in the words of Mr. Santosh Kumar Sinha “the proposal took up the shape of a building in a much less time.” He further says this is present for the industrialists of Bihar by the ABIS firm at the beginning of the year 2021.

The Founder and the Managing Director of the firm while addressing the press said that he met Shri. Giriraj Singh in the year 2018, during the latter’s India Tour, in Chhattisgarh’s district RajNandGaon, where during the conversation latter proposed that instead of a long chain of buying maize from Bihar but exporting chicken to Bihar, Mr.Bahadur should think of establishing a feed plant in Bihar itself. Mr. Bahadur Ali says that he was highly inspired and as a result contacted the state government of Bihar with the said proposal and since then it has been a smooth roller coaster ride. The support extended by BIADA is above par and their will to deliver the work exceeded expectations.

He further says that quality protein is what everyone needs in today’s day to day life and ABIS EXPORTS as a quintessential poultry feed is looking forward to fulfill the said needs. He has further requested Shrimati Renu to collaborate with the farmers, extend them a helping hand, and set up a model similar to Odisha where subsidies and per capita investment are provided to the farmers. He goes on to mention that an exponential rise was seen in the poultry industry in Telangana and Odisha and if the government will look after the farmers of Bihar, then within five years down the line, Bihar would lead the charts with respect to poultry feed production.

The Chief Guest of Honor Shri Giriraj Singh congratulated ABIS EXPORTS and said that it is highly important to look after the development of the country and the poultry industry can play a major role in doing the same.